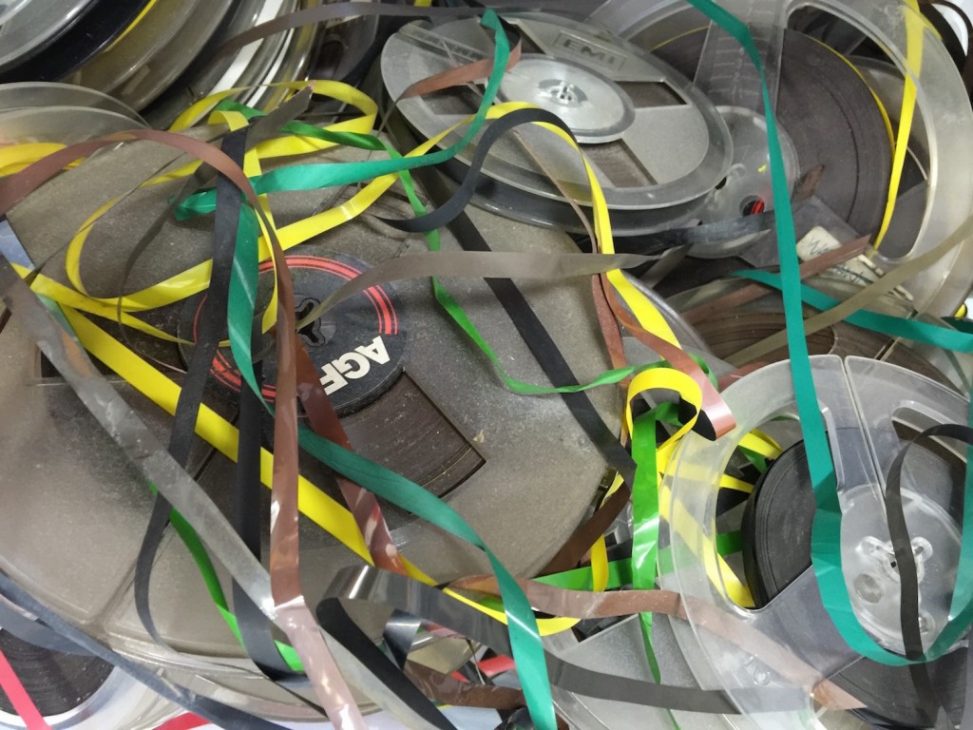 Former BBC radio broadcaster Ted Gundry worked closely with the Azook team. Alongside our staff and volunteers Ted  began the enormous task of digitising the vast collection of audio which he had recorded during his long and distinguished career. Although Ted passed away in April 2016, his desk here in our office is just as he left it and we miss him a great deal.

Ted’s recordings are nationally important. Recorded to the highest professional standards Ted began interviewing, or “having a little chat”, with people across Cornwall from the 1970s until 2016. Some of the older people on his earlier reels recount their memories from the 19th century. Many of the accents have since disappeared. Ted travelled widely, visiting Cornish communities across the globe. His collection is irreplaceable.During the past few years Ted digitised and edited some 345 recordings which were made publicly available via cornishmemory.com. Steadily bringing in reel-to-reel tapes, Ted made the decision to gift his entire collection to Azook, knowing that we would work hard to create public access to his life’s work.

We are now in the process of creating a project to realise Ted’s aspirations. A lot of work needs to be done before we can start digitising the recordings and publishing them online. We need to unpack and properly store the collection. There are approximately 1,950 tape reels which need cataloguing and a number of other formats to identify and count. Many tapes are unboxed and in urgent need of individual new boxes.

As a non-profit making organisation, Azook needs your help to support this preliminary work. There is no time to lose as some of the tapes are very fragile and it is a race against time to work on them before they deteriorate further.

How you can help

Can you spare a few pounds to donate to the project?

£15 buys a large archive storage box to hold 40 reels (in their individual boxes).

Unless donors wish to remain anonymous we will list everyone’s name (not the amount) on our ‘Ted Gundry Collection – Thank You‘ page. You will be helping us to  honour Ted’s wishes and share his incredible legacy with future generations. He wanted the thousands of Cornish voices and stories that he recorded to be heard free online forever.

Donations via PayPal are very welcome.

What will happen to the collection?

The collection will have a permanent home at the new Cornish Record Office, Kresen Kernow, when it opens in 2018. When this happens we would like the collection to be in the best possible physical condition, with digital copies already accessible online.

We will be writing about the project as it progresses on our blog.